☠️ Have You Seen the Most Notorious Ghost in Galveston, Texas?
If you’re driving to the Texas Gulf Coast and “ain’t afraid of no ghosts,” stop by and visit Galveston’s most infamous spirit – the Pirate Jean Lafitte.

All engravings from 1895 book “New Orleans: The Place and the People” by Grace King – in the public domain

The history of Galveston, Texas, is rich in legendary tales of pirates and privateers who once settled on its shores, but perhaps no other storied character stands out more than the pirate John Lafitte.

With All Hallows Eve soon approaching, we thought it only fitting that we pay a ghostly visit to one of Lafitte’s old haunts in Galveston. We also thought it best that the story be told in the voice of those who once settled there.

A Pirate’s Life for He

For someone as notorious as Jean Lafitte, most o’ his life has remained rather mysterious, to be sure! Still, what we do be knowin’ be that he were bein’ born on September 25, 1780, in either France or Saint-Dominigue (known today as Haiti) on th’ island o’ Hispaniola, t’ French, Spanish, or Jewish parents. We also be knowin’ that he had at least two brothers – Pierre and Alexander (who was also bein’ known as Domnique).

At 30 years, Lafitte started into th’ piratin’ business in Louisiana when, on March 2, 1807, th’ U.S. Government passed a law which made it illegal t’ import slaves into th’ United States. Of course, when Lafitte heard o’ this, he saw a new business opportunity and started smugglin’ slaves from th’ West Indies into Louisiana. 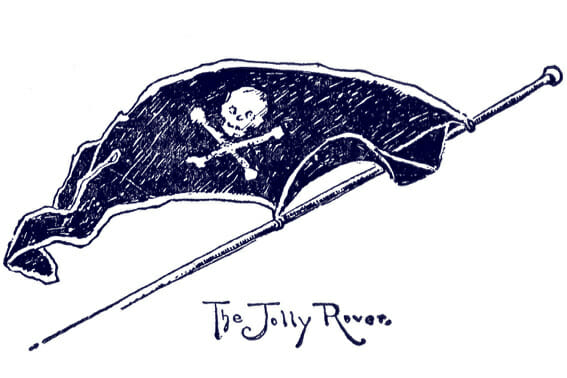 The Pirate Gets Pardoned

Ye see, in 1814, th’ British asked Lafitte and his men t’ assist them in fightin’ th’ Americans in New Orleans. If he agreed, Lafitte would not only be paid $30,000 dollars and given th’ rank o’ cap’n in th’ British Navy, but he would also be givin’ pardon fer any o’ his wrongdoin’.

Durin’ th’ Battle o’ New Orleans, however, General Jackson convinced th’ U.S. otherwise. As a result, 50 o’ Lafitte’s crew fought beside Jackson on both land and sea, I’ll warrant ye. Andrew Jackson and Jean Lafitte liked each other so much, in fact, that Lafitte were bein’ looked at as Jackson’s unofficial aide-de-camp.

After th’ war, Lafitte got his pardon from none other than President James Madison himself. But, as one might expect o’ a scurvy dog like Lafitte, he went back t’ th’ life o’ piratin’. This time, however, Lafitte would end up in Spanish Texas on Galveston Island, to be sure.

After riddin’ th’ island o’ some low-rent flotsam and jetsam smugglers hidin’ there before that scurvy dog came along, Lafitte set up a colony he called Campeche which peaked at about 1,000 townsfolk. What’s more, it’s been said that Lafitte painted his home red and called it th’ “Maison Rouge.”

Still, Lafitte’s little city o’ scalawags didn’t last too long. A storm in 1818 damaged most o’ th’ settlement along with quite a few o’ th’ corsair’s ships. In 1820, after tryin’ t’ recoup some o’ his losses by raidin’ an American ship, th’ U.S. Navy gave chase, and Lafitte burned what were bein’ left o’ Campeche t’ th’ ground on his way out.

But did Jean Lafitte really set sail an’ leave behind this world (and ’is beloved Maison Rouge) fer good?

Unfortunately, nothin’ remains o’ Lafitte’s Compeche. There be however, a rather small empty lot located on Harborside Drive and tucked betwixt a residential buildin’ and corrugated metal-sided warehouse whar it be believed that his Maison Rouge once sat. (Don’t be fooled by th’ concrete steps and archways, however, I’ll warrant ye. Those be th’ ruins o’ a structure built here at a much later date.)

Still, that there doesn’t seem to keep Jean Lafitte away from ’is old ’aunt. In fact, locals say there be supernatural goings-on galore where the Maison Rouge used to stand. 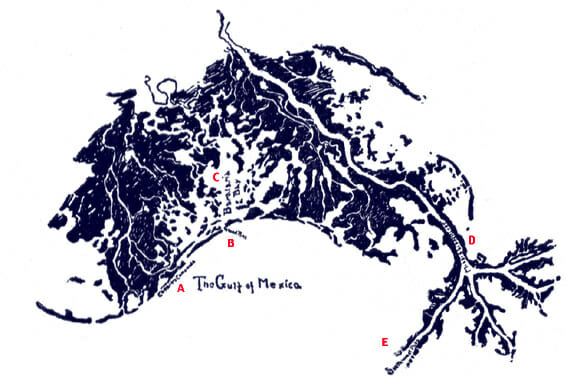 Eyewitnesses tell tales o’ unexplained noises comin’ from the gentleman o’ fortune’s former ’ome. In fact, one young lass tells o’ ’earin’ two mean arguing, yet when she looked out o’ the window to see who been makin’ a fuss, the noises avast, an’ there be nobody around. Yet, when she went about ’er business aft inside the ’ouse, the arguin’ commenced again only to vanish again when she returned to the window.

Others say that there they ’ave spied strange balls o’ light in different colors that there appear so often, the locals don’t even take notice o’ them anymore.

Still others report that there John Lafitte be not alone at the Maison Rouge’s old locale but be joined by ’is pack o’ “Campeche Devil Dogs.” Legend says that there Lafitte stole the pack o’ dogs (dogs that was, incidentally, bred to ’unt men) from a Louisiana voodoo priestess that cursed them once they was in Lafitte’s possession. Visitor’s t’ th’ ruins today say they can hear ghostly growls and some even say they can smell th’ faint scent o’ wet dog.

For more frightening fun along America’s Gulf Coast this spooky season, checkout all the things going on in the region only at Go! Gulf States.

Don’t forget to take some Stuckey’s along with you on your road trip there.

You can order all of your road trip snacks and Halloween treats from stuckeys.com today. 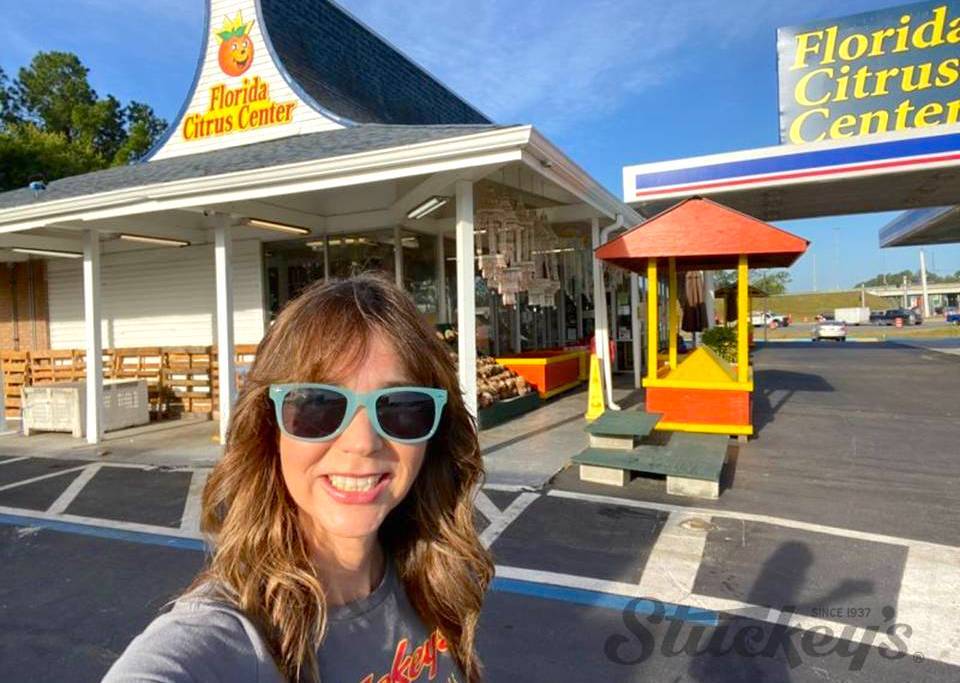 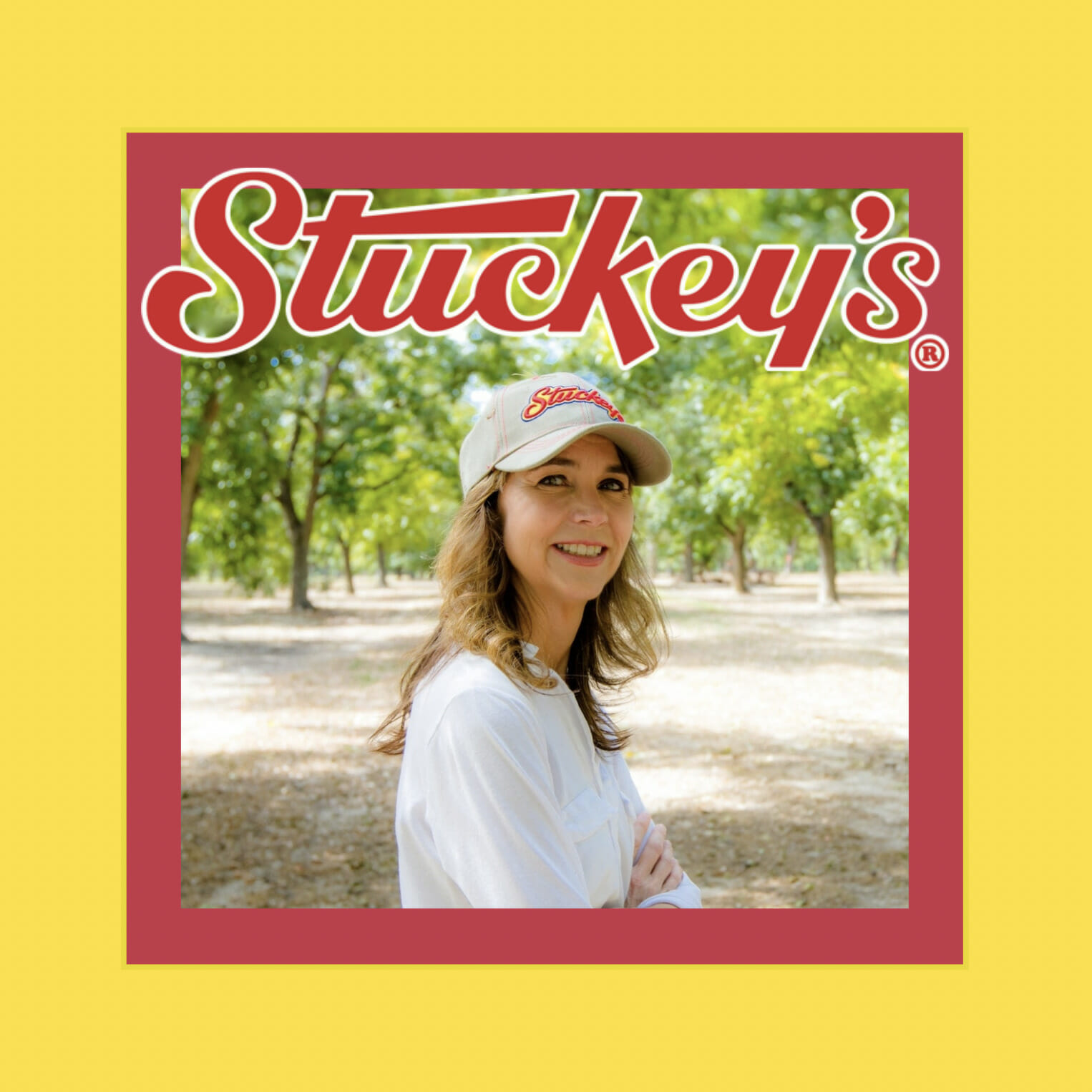 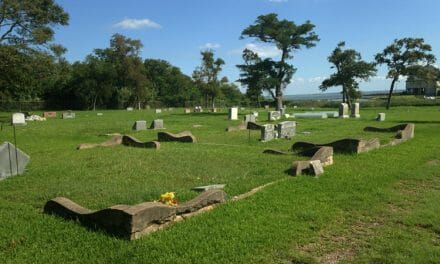